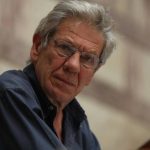 Member of the Greek Parliament for Ilia Prefecture

Born in 1950 in Lechena, in Ilia Prefecture
Family Status:  He has a daughter, Olga Balaouras

Professional Experience: Economist in the Department of Economic Studies of the Bank of Greece

Leading member of the anti-dictatorship student movement. Along with his fellow students, co-writers of the anti-junta text “Study of the 12” he underwent a Dean’s inquiry, charged with disciplinary offence. On account of his active membership in the anti-Junta movement he was brought to court and convicted in a case known as the “the 11 trial”. He was forced to serve in the military and he was imprisoned and tortured by the military police after the Athens Polytechnic uprising in 1973.

He is co-founder of the Board of Imprisoned and Exciled persons by the Greek junta in the years 1967-1974.

He has been the first democratically elected Chairman of the Students’ Association in the Economic University (ΑΣΟΕΕ) after the restoration of Democracy in Greece. He has also participated in the opening convention of the Union of Student Associations (ΕΦΕΕ). He has been an active member of the political youth Organisation “Rigas Fereos” affiliated to the left wing political party KKE Esoterikou AA. He has taken part in all the demonstrations for social,political and financial people’s rights in the post- junta era. He has also been a member of AKOA and currently is a member of Syriza. He has taken part in elections as a candidate with the above mentioned political parties in Athens and Ilia Prefecture.

Member of the General Board of the Bank of Greece. He has taken part in conventions in Greece and abroad, in European Trade Unions K.T. (ESOCTE). During the discussions between trade unions and the management of the European Central Bank he argued with the president Jean-Glaude Trichet over the Greek crisis.

Co-founder of the Commerce of Economics and many times elected member of the Board.

Board member of “The National Committee for Claiming German War Compensations towards Greece”. He has represented the Committee to Berlin, Geneva and the Hague conventions.

Co-founder of “Eurorallies”, Greek Social Forum and “Network of Immigrant Support”.
Activist in movements in Porto Alegre, Genoa and Paris.

As a delegate of the “Intifada” association he took part in a solidarity mission to the Gaza Strip Palestinians during the Israeli bombing in January 2009.

Currently writing articles in political and economic newspapers in Athens. Associate Journalist of “Avgi” newspaper. Member of the Editors’ Board of “Epochi” newspaper since 1989 and permanent columnist.